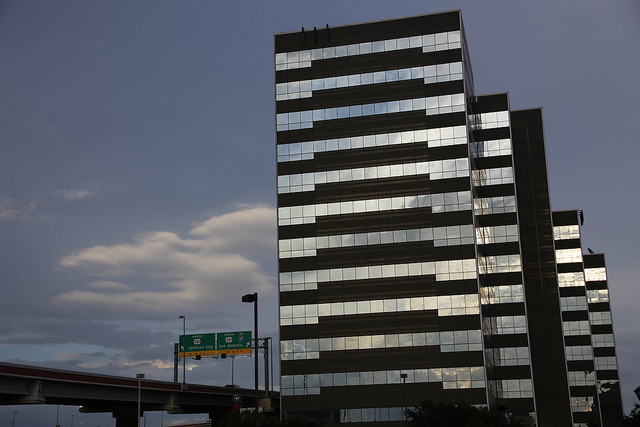 “Suburban Office Tower” by Paul Sableman is licensed under CC BY 2.0.

By Brian Pedersen, September 17, 2018 at 7:00 AM
ADP, a tenant that occupies 60,000 square feet in a suite at 7535 Windsor Drive in Upper Macungie Township, plans to move out next year. However, brokers say there is still a lot of activity in the suburban office market of Lehigh and Northampton counties.

While a downtown revival is going strong in the cities of Lehigh and Northampton counties, the office market remains active and stable outside these urban areas. And the fundamentals of the suburban office market will continue to boost demand over the next two years.
That’s according to several brokers who shared insights on this market in these two counties.

The western and suburban portion of Lehigh County, which includes areas of Upper Macungie and South Whitehall townships, for example, shows a significant number of lease renewals and new tenants.
“There’s still been a lot of activity on the West End,” said Ryan Dietrick, senior vice president at Colliers International in Upper Macungie Township.
The high number of lease renewals in the area shows that tenants want to be there, Dietrick added.
The same goes for suburban areas such as South Whitehall Township.

“The west is more attractive to tenants simply by nature of having a larger inventory of Class-A buildings than the east,” said Jody King, vice president of CBRE Inc. in Upper Macungie Township. “Class-A vacancy is 14 percent in the west, 24.6 percent in the east.”